Be Seen In Green is back and bigger than ever before!

On Friday 7 July The Royal Manchester Children’s Hospital is asking people to show their support by wearing an item of  green and making a donation.   We suggest donations of £1 for students and £2 for staff to take part.

This year, Be Seen in Green Day is raising funds to support children and young people diagnosed with brain tumours, right here in Manchester and the North West. 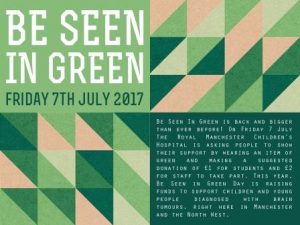 A group of year 7 students have made and will be selling a variety of Manchester themed badges during KS4 lunch tomorrow (Friday 9th June, late lunch).  They are asking for contributions of 50p for students and £1 for staff per badge, with all money raised going to the Forever Manchester charity. 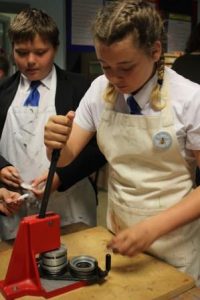 If you would like to donate, there is still time on the group’s Justgiving  page.

Well done to Mr Green, Mr Jones, Miss Dickinson, Miss Morris, Miss Lister, Miss O’Donnell, Mrs Maguire and Miss Mullen, and thank you to all who donated in their support.

Mr Owen said “Steve made a huge contribution to Manchester Health Academy during his time as Governor, and helped shape the Academy into the good school that it is today, benefitting hundreds of students.  He was also a great ambassador for public health and wellbeing in Manchester, as well as being a tireless charity fundraiser.  Steve was a friend and someone who gave everything to his hobbies and his professional life.  Steve would have been running in this event, so David and I ran in his place. I am very proud that so many Academy staff members ran today, raising funds for two fantastic local hospitals.”

A big thank you to everyone that supported the Comic Relief cake sale on Friday, either by bringing cakes in or buying them here at the Academy.

Lots of students brought cakes in, some lovely ones were made by Lauren, Nichola, Olivia-Li and Hussain, and not forgetting Miss Lomas and her form who baked and made posters to advertise the event.

Let’s turn the Academy pink on Valentine’s Day and raise funds for a great cause!

On Tuesday 14th February students are invited to wear an item of pink with their uniform and to make a voluntary donation to the charity.  We plan to hold a cake sale, so any donations of cakes would be very gratefully received.

Staff will also be wearing pink and donating.

An option for parents/carers to donate on ParentPay will be set up nearer to the date. 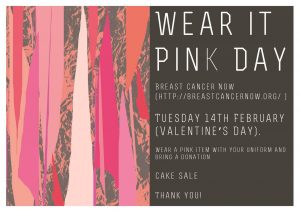 A huge thank you to everyone who has supported our One Big Toy Appeal.  We have managed to raise a fantastic total of £415.00!

This time of year can be a time of being asked to donate to lots of causes, so we really appreciate that you have supported this appeal that will benefit lots of poorly children.

This Christmas, instead of collecting toys, we asked for donations towards the Royal Manchester Children’s Hospital’s One Big Toy appeal. They would like to build a multi-sensory room that will benefit even the sickest children all year round.

If you have not donated but would like to, there is still time to do so on our JustGiving page here, or parents and carers of Academy students can donate via ParentPay.

This Christmas, instead of collecting toys, we are asking for donations towards the Royal Manchester Children’s Hospital’s One Big Toy appeal. They would like to build a multi-sensory room that will benefit even the sickest children all year round.  We will be holding a number of fundraising activities for this great cause until we break for Christmas, all donations will be very gratefully received.

You can donate to this fantastic cause on ParentPay or via our JustGiving page. 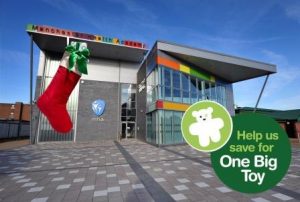 Next Friday, 21st October, we will be supporting ‘Show Racism the Red Card’, the UK’s anti-racism educational charity. Students will be allowed to wear an item of red on the day for a donation of £1.00. (Please note no face paints, red hair or wigs, hoodies or red footwear will be allowed.) There will be a number of fun activities during the day, including a raffle, cake sale and ‘Beat the Goalie’. All donations will be appreciated!

Manchester Health Academy Principal, Mr Owen, said “I am really proud of the efforts our students and staff have made to raise funds for this important cause – we embed health education across our curriculum and events like this help to highlight how our students can make a positive difference to themselves and those around them.” 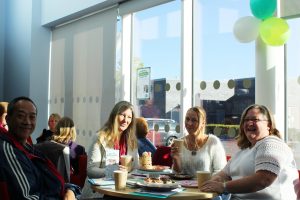 Students and staff are invited to wear an item of green and donate £1 on Friday 1st July, with all donations going to the Royal Manchester Children’s Hospital Helipad Appeal.

Standard school uniform should be worn with an additional green item, donate your money at form time.  This is a great cause that will benefit people across Manchester, please give generously!

Students should bring their £1 to the Academy, or parents can donate via ParentPay.