Manchester United Foundation uses football to engage and inspire young people to build a better life for themselves and unite the communities in which they live. Dedicated staff deliver football coaching, educational programmes and personal development, providing young people with opportunities to change their lives for the better.

Last night saw the first of many football fixtures being hosted at Manchester Health Academy this year for our partner primary schools.

Year 3&4 pupils were invited to take part in a friendly league which consists of Button Lane, Northenden, Rackhouse, Sandilands and St Wilfrid’s primary schools. Each school was represented last night and the event was a great success, with 42 participants taking part. The atmosphere and spirit in which each of the games were played in was a credit to all the schools and the staff, with a special thank you to our 6th form students who refereed on the night.

Angela Nilan from Rackhouse Primary said ‘what a great evening of football it was tonight. The boys from Rackhouse are buzzing and they don’t get these opportunities very often, so cheers for going out of your way to organise them. Please thank all your referees too‘. 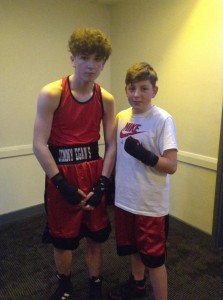 Two of our year 10 pupils boxed on the Jimmy Egan boxing club show in Wythenshawe Forum on Saturday 17th January, to celebrate the clubs 35th year anniversary. Sean McManus came out strong, throwing a variety of combinations keeping his opponent on the ropes. However, his opponent came back to take the lead in the last round. It was very close, but unfortunately Sean lost narrowly on points.

Anthony Strang and his opponent got off to a difficult start. Both boxers showed great determination and strength. Both were throwing straight shots that were connecting. But Anthony’s power was too much for his opponent, therefore Anthony won by TKO.

Well done Sean and Anthony. Keep up the hard work.

Boxing is a dynamic form of exercise that has many social, physical and mental well-being benefits. Many people have expressed that participating in boxing has helped with self confidence and self esteem. Others enjoy boxing because it is different and liberating and it has helped them to overcome situations such as being bullied or needing to combat stress.

If you would like to start boxing training, speak to Miss Saleh for further information.